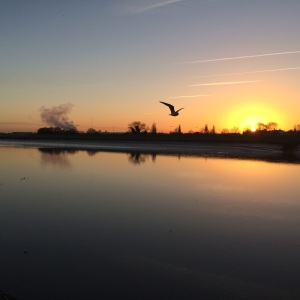 A Curate’s egg sort of a day, that included further considerations about  a tender submission, breakfast with David going over legal documents, some impromptu and unexpected advice from the accountant prior to seeing the solicitor about Important Grown Up Things like Wills, Power of Attorney and Advance Declarations (Living Wills). Then a long drive for my professional supervision session in Kings Lynn followed by a wonderful sunset on  the quay. Then driving home I witnessed a horrible RTA involving the frail old man I had seen in the garage 5 minutes earlier, who had driven away with his lights switched off. Stayed with him till the police came then drove home. No food since breakfast and subsequently very hungry.

But the gods were not with me. They never are when I cook in the wrong frame of mind.  I marinaded the fresh tofu I bought in Tofurei in light soy sauce, grated ginger and garlic, lemon grass and sesame seeds. Made a flat omelette with spring onion, one egg and sprinkled with sesame seeds. When it was cool I rolled it then sliced it (this is the non-vegan version, just leave this bit out if you like).

We live in the sticks and don’t have new fangled luxuries such as mains gas. So I use a camping stove to stir fry. First lesson. In the winter, don’t leave the gas canisters out in the cold utility room. Gas pressure was rubbish for stir frying but I carried on regardless. Second lesson. Don’t forget to buy soba noodles. I had, so had to use vermicelli noodles instead which I hate as they always stick together no matter how hard I try and how many times I throw them in cold water as soon as they are done. Fourth lesson. Don’t forget to remove the tofu from the marinade when you fry it. I was in such a hurry I threw it all in the pan which meant it didn’t crisp up. Sixth lesson. Stir fry the vegetables (sliced leek, pepper, spring onion, mushroom, garlic, ginger) swiftly. 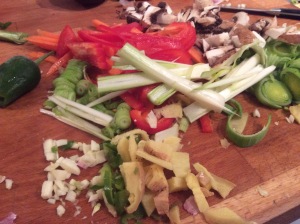 I couldn’t because the gas pressure was too low. Seventh lesson.  Check you have all the ingredients you need. I didn’t so we didn’t have any rice wine and had to raid the Fino sherry bottle instead. Eighth lesson. Don’t break the no drinking rule you set for yourself. I did. When I swigged some dry sherry from the bottle. Ninth lesson. When mixing cornflour with some light soy sauce, get the proportions right or you will end up with a claggy sauce. I did (have a claggy sauce). Tenth lesson. Don’t transfer the wok to the hot plate in a vain attempt to get more heat, when you already know the wok doesn’t conduct the heat properly on the halogen hob. It will only make you more cross. It did.

We ate it. I was grumpy. The egg strips were scattered on the non vegan dish. The flavour was delicious. It looked like a dogs dinner. We shoukd’ve had a takeaway, and the kitchen looks like  bomb has hit it!

And all the time, I couldn’t stop thinking about the poor old boy in the car who looked so frail and alone in his ripped up car, and wondered if  he had family to care for him.  Dinner didn’t matter but he does. 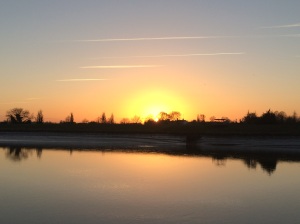