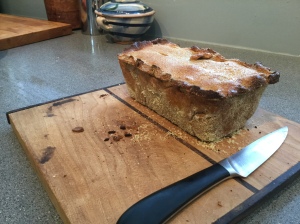 I know, I know. It’s been a while. More than a while. It has been a busy  year and I apologise. I have been remiss. I have failed to post. I have been doing other things. And a bit of me wondered whether you might be bored with my persistent food blogging. So I stopped for a while.  But so many of you have said in the past few weeks “what’s happened?” “where are our Christmas recipes?” “have you given up?”.  And I realised that nothing had happened, being me I had simply filled my time with other things; the Christmas recipes are still in there. And no I haven’t given up!! When have you ever known me to give up?

So here’s a new pie that I invented and which made its’ maiden appearance at Marion and Andrew’s first wedding anniversary celebration at ours last week end.  The meat eaters had some marvellous pheasant with deep orange and pomegranate sauce. But the vegetarians had the star, which was the new raised pie. I seem to have become addicted to making wholemeal hot watercrust pastry and it is now my pastry of choice for pies and for flans. It neither shrinks nor cracks, it is very mouldable. Most of all it is easy.

8oz wholemeal flour, half a teaspoon of salt, 1 oz coarse oatmeal.  Mix these together in a bowl then add 15ml white wine vinegar, 30ml olive oil, about 60ml hot water (maybe more but you will have to judge that by the feel and how the mixture binds together). Sometimes I add some grated cheese.  Knead lightly then set aside for 30 minutes to relax (the pastry, not you!)

Wash and peel 300g Jerusalem artichoke and slice thickly then cook gently with one chopped leek in butter and garlic. Season with salt and black pepper. Set aside.

Chop 300g of good old gnarly carrots and cook gently in butter, lemon juice and a tiny bit of sugar at the end. Allow to cool. Season with white pepper, then add a little chopped tarragon or basil. Not both.

Unpack one whole vacuum pack of chestnuts and dice.  Saute some field mushrooms with garlic and add the chestnuts and at the end a little bit of dark soy sauce.

Now you are ready to construct the pie – or pies.  If it’s pies then it will make 3 small pies.  Either prepare 3 empty bean tins by removing labels, washing thoroughly then grease the OUTSIDE and dust with coarse semolina before you roll out 3 circles and form the pastry by hand around the outside of the tins until it comes up the sides about 3.5cm.  Then put them on baking parchment and into the fridge for 20 minutes to firm up.   Or (this is easier) use a small loaf tin, grease and line with coarse semolina then roll out the pastry into a rectangle and line the tin.  Then whether it’s loaf tin or baked bean tin, add layers of the filling – if using baked bean tins then remove the tin, obvs!!  Make sure the filling is good and moist as there is no meat in here to give you juices!  Then roll out the lids, brush the joins and tops with egg wash and put in the oven at 190C for 25 minutes and then turn down to 170 for 10 more minutes.  Take out of the oven and leave to stand for 10 minutes before serving. 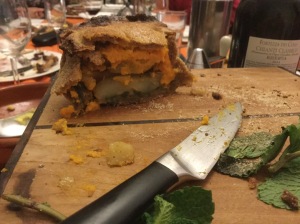 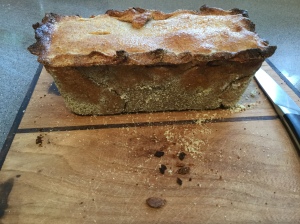 What’s the deal with coarse semolina?  Those who follow this blog regularly know that I use it instead of flour to dust the inside of pans and tins.  For savoury dishes I use it liberally as it helps keep the crust crusty and the gravy inside!!