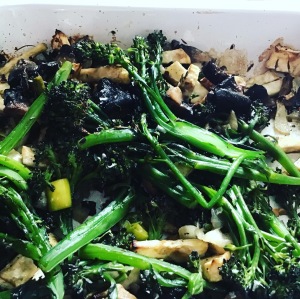 This year, in my world – you know my world: a bit crazy, food and cooking biased, house full of people, veg growing, grandson fixated – many things have changed and some things stay reassuringly constant.  Like Gill Meller.

Along with other favourite food writers like Diana Henry, Hugh FW, Olia Hercules, Ravinder Bhogal, when you read Gill its not just for the recipes. And it’s not all about the ingredients.  It’s his style, the words, the modest foundation that allows the food to speak for itself. It’s not self-serving but is genuinely brilliant!

And so it was with huge excitement that the postman delivered Gill’s latest Root, Stem, Leaf, Flower a few weeks ago, and as always I disappeared inside its covers for hours. And hours. It is a permanent fixture whatever room I’m in – only an arm’s length away.

Yesterday I made the stuffed buckwheat pancakes.  David also had newly lifted (a bit early) pink fir apple potatoes and we both shared a simple salad – and the pancakes.

I could go through the method start to finish but I won’t. Why don’t you buy the book instead?  All of Gill’s recipes are straightforward.  This was no exception.

In essence – chop onion and celeriac, season well and rub through with olive oil then roast till they are nearly done. Then add chopped field mushrooms and steamed tenderstem broccoli for another 10 minutes.  Season well with salt and black pepper.  Make lacy pancakes with buckwheat flour (not a flour, but a grass!), milk and egg.  And make a thick, well seasoned bechamel – I added a grating of nutmeg. Stuff the pancakes with the roasted vegetables (best if the broccoli is just a little charred in my view) and if you like,

add dots of Gorgonzola or Roquefort. You won’t need much.  Roll the pancakes round the vegetables and place in a dish with just a little olive oil wiped across the base. cover with bechamel and cook in a hot oven till hot, brown and bubbling.