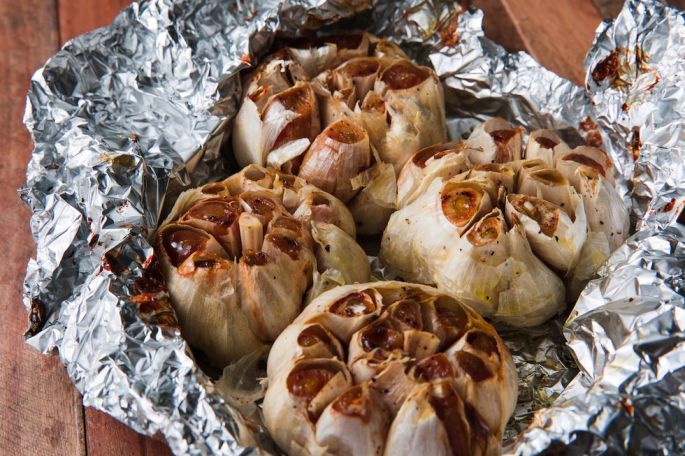 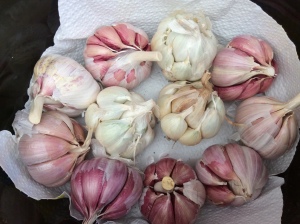 First Angie offered me garlic, chilli and a bag of 10 year out of date mixed grains. I declined the latter. She insists they will be eaten at some point. I hope I am not there in Forest Gate when she does!

I thought of a number of chilli/garlic/cabbage combos to be honest none of them filled me with delight.  I have one that includes all three, just to play the game. After all, I started it!  Then there are other suggestions for each ingredient.  Apparently there is a lot of garlic and a lot of chilli!

(Sauerkraut is not particularly photogenic and so I offer you pickled dill cucumbers instead).

Bet you were not expecting sauerkaraut!  Full of probiotics, it’s all the rage. I have some fermenting away right now.  Having experimented this is what I have learned:

OK. Enough advice. This is what you do.  Remove thick stalks. Use any old cabbage. About 1 kilo or so. Slice very thinly then slice again if the bits look too long. The idea is to increase the surface area of each slice.  Put it all in a big bowl and using the end of a rolling pin bash it. And bash it and bash it some more. You want to bruise it so juice comes out.  Mix in 2 tbsp coarse sea salt.  Mix and squeeze, massage and pummel for at least 10 minutes. Maybe more. Then do it again.  By now brine will have formed so if you like add some caraway seed and black pepper then push the cabbage under the brine.

Cover with cling films do push down to exclude all the air and weight it with a plate that fits inside the bowl with a couple of tins of beans on top.  The idea is that the cabbage should sit beneath its brine.  Cover the bowl with more cling film and leave it somewhere at 18-20C for a few days.

Check the cabbage every other day, lift the cling film and peer in. You should see bubbles after a couple of days. Stir it round a bit and weight it down again. Wait about 6 days and it should be ready to bottle.

Don’t worry if you see flecks of mould, just flick them out.  Taste it. It should be sour. Pack into sterilised jars put a lid on, and store in the fridge.

Does garlic require a recipe?  We grow lots of garlic and usually it is hanging in the greenhouse once it’s been lifted and the last lot is finished about 2 months before the next lot is harvested.  You can salt it, brine it, store it in olive oil, chop it into your own gremolata, cook a roast chicken with 20 cloves, pierce lamb with slivers of garlic  and rosemary. Or you can make Skordalia. Thick, unctuous loveliness.

Boil a pound of potatoes. Mash or put in a food processor with 6-8 cloves of garlic and season well with salt. No pepper. Pour in 200ml olive oil. Mix till all combined. Add a squeeze of lemon juice. Taste to check seasoning.  Serve with Greek mezzo, olives, aubergine, bread, anchovies. Imagine you are in Ithaka. 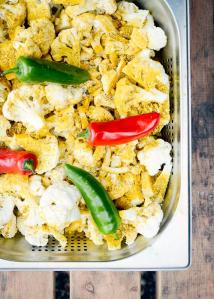 Quickest and best way to keep chillies? Hang them up to dry then put them in the food processor until they are in pieces. Store in tins or jars. Use in everything (in our house)  – except custard and cake!