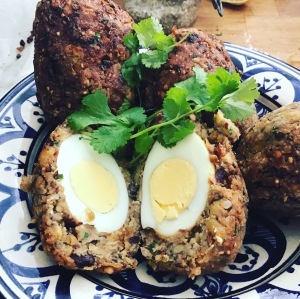 Yesterday we attempted – and failed – to get to Sea Palling. Traffic.

Today we will leave late afternoon and head for our old haunt, Walberswick beach. For years we would camp there every summer. Kids, friends, swimming, beach fires, swimming all hours of the day and night.

Scotch eggs are called for. Of the vegetarian variety. And cold potatoes with aioli. And radish, tomato and onion salad. To be eaten post-swim, on the beach, with beer.

i realised I’d not made a scotch egg since I was at school, let alone a vegetarian one.

Hard boil four or five eggs. Cool and take off the shell.

Drain a tin of chick peas and half a tin of red kidney beans.

In the food processor add one small onion, three fat cloves of garlic, a handful of parsley and fresh coriander, a good sprinkle of Aleppo chilli flakes, a tablespoon of medium oatmeal, two teaspoons of cumin seed, the seeds from half a dozen green cardamom, a flat dessert spoon of garlic powder, salt and black pepper and a tablespoon of  yeast flakes. Blitz in the processor then add the beans, blitz again until it is no longer chunky, but make sure it doesn’t turn into hummus! It needs a bit of substance to it. Turn into a bowl (the moisture, not you!), cover and put in the fridge for half an hour. 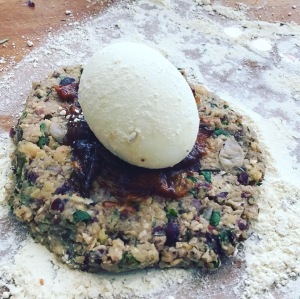 Prepare for action.  Have 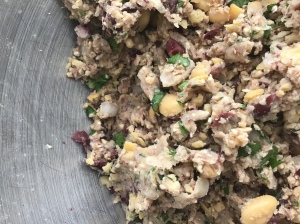 plenty of kitchen roll ready for draining. From right to left, have a bowl of cold water, your bowl of bean mixture, eggs, brinjal chutney (my special ingredient but you can delete if you don’t like it), a work surface dusted with gram flour (chick pea flour), a slotted spoon and then your vegetable oil in a pan.  The pan should be big enough for you to turn the egg over whilst it is cooking but not so vast that you waste a lot of oil..

Wet your hands then take a good palm full of bean mixture. Flatten it out across your palm then spread a teaspoon of brinjal over it, then roll the egg in the flour and put the egg on top.  Cup your hand so that the mixture spreads up the side of the egg, then gently seal the bean mixture round the egg at the top so there are no gaps and no air trapped inside. Do this with as many eggs as you need then put on an oiled plate, cover and put in the fridge to firm up for 15 minutes.

Heat the oil to 200C – or put a small amount of the mixture in to test it.  It should rise quickly to the surface   -click link for video.  If  it just sits on the bottom of the pan and doesn’t look ‘lively’ then the fat is not hot enough.

Gently lower in one egg at a time.  Leave it I disturbed for 3-4 minutes so that the bottom crisps, then gently roll it over until all surfaces are golden brown giving each ‘roll a further two minutes until evenly brown and crisp all over.  Repeat.

Cool on kitchen towel on a rack.