Yesterday saw the inaugural trial of the sausage-maker attachment for the Kenwood mixer.

Today, we pottered around North Suffolk looking for a house – but I was seriously distracted. How likely was it that the vegan sausage casings would be delivered today? Not likely, I thought. I was wrong! Alex the postman (who sometimes brings me rabbit, partridge and pheasant in the back of the post van) was crowned my champion of the day.

Whilst David was still unpacking the campervan, I was already chopping. I had been mulling over the recipe for his vegetarian sausages in my head all day. By the time you read this we will have already eaten them and David pronounced them superb. I agree.

He always misses out (I think, being a confirmed carnivore) when we have a ‘hit the top of the oven’ toad-in-the-hole or a sausage casserole, simply because he is a vegetarian. I promised I would make him sausages worth eating if he bought me a sausage-maker attachment for my Kenwood. He did. And today was the day.

For six sausages I used the following:

Two spring onions, a medium sized wedge off the side of a red pepper, both finely chopped. A small handful of mixed garden herbs – parsley, sage and thyme today chopped small. Two finely chopped cloves of black garlic (thank you Fran). Add about 15ml rapeseed oil to a pan and heat it gently – then add the cooked ingredients and fry very slowly – we are aiming for soft onion and pepper here, not burned.

Turn the ingredients into a scrupulously clean bowl. Add five heaped tablespoons of cooked brown rice (ours was well refrigerated after last night’s curry), six to eight vacuum-packed chestnuts, 120g firm tofu and 100g Tartuffi (soy cream cheese). Then add about a tablespoon of brown miso paste, about a teaspoon of ground white pepper, a quarter of a teaspoon of cayenne powder, one teaspoon of whole caraway seed and half a teaspoon of roughly ground fennel seed. You should not need more salt as the miso is salty – but taste the mixture anyway, and either add more miso or seasalt if you think you need it. I find with many foods, especially those containing rice, that it pays to slightly ‘over season’ as the flavour frequently mellows when cooked.

Wash your hands, or don plastic gloves. Now do a lot of squidging to combine all the ingredients and to break the chestnuts into small pieces. The mixture will make satisfyingly squelching noises! Taste again. I found mine needed just a little more miso. Now you are ready to fill the casings.

Yesterday I learned a lot during my first attempt using the sausage maker……..

make sure the sausage prong thing is wet – it makes it easier to apply the casing
dont over-fill the casing or it will pop
don’t over-estimate how much mixture there is in the bowl
practice first
better to make four or five at a time to start with, rather than pretend you are a Master Butcher and fight with a string of 20. It could get ugly
Leave long tails at each end of the sausage tube when filled, to allow for knotting
look up how to tie knots in sausages before you have them bulging and expectant in the casing
have kitchen towel available to mop up as the mixture squirts out of both ends when you haven’t allowed sufficiently long ‘ends’
four arms and four hands are helpful – as is a calm demeanour
if you have someone helping you, make sure it is someone who loves you
don’t drink before trying this, It gets messy!
Sadly most of that learning went out of the window today as – is my usual style – I decided to go off-piste and use a piping bag with a ginormous nozzle instead of the sausage-maker, due to the small volume of mixture I’d made. So I requested help from David – who had by then emptied the campervan and downed a couple of glasses of wine.

He expertly clamped the end of the tube of vegan casing onto the nozzle and having transferred the mixture from the bowl into the piping bag, I squeezed hard. In fact it was easy peasy and we soon had a tube of sausage. This mixture made six large sausages.

Once made and tied, I suggest you put them in the fridge for an hour to firm up. Then either baste with a little oil and grill, or fry gently, turning the sausages regularly for an even brown. Make sure they are piping hot as you should be careful when re-heating rice. If you intend to use rice made on the day then make sure it is cooled before you use it. If you are using rice from a previous meal ensure that you chill it quickly after use as reheated rice is a common cause of upset tummies unless it is piping hot). 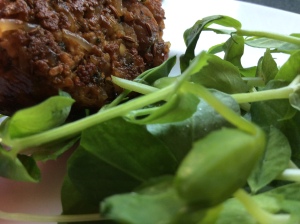 It seems to me after this first attempt at vegetarian sausages, that the trick is to use sufficient oil to keep the sausage moist inside the casing, and that using the tofu and Tartuffi certainly helped the mixture to bind, and it increases the nutritional value of course. I’m going to experiment again tomorrow using chick peas, buckwheat and wasabi. Watch this space!

Tonight’s sausages were served with new potatoes and onion gravy with buttery greens. They had a great flavour, the caraway and fennel came through nicely and I really liked the rough ‘sausage-meat’ texture. Next stop toad-in-the-hole.

2 thoughts on “Vegetarian sausage anyone?”