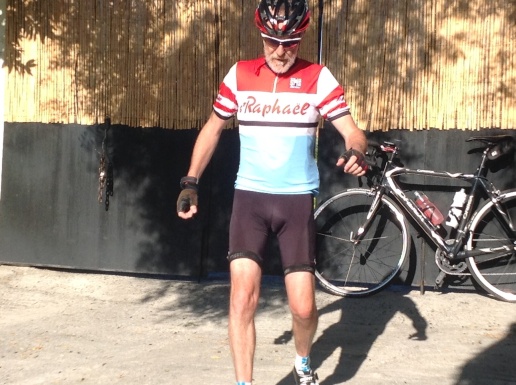 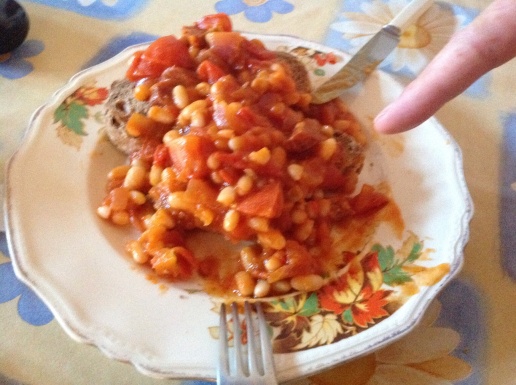 Another hot and sunny day in Spain. I was awake and it was unconscionably early for a holiday day. I was laying in bed reading my Hemingway biography, the sun streaming in and the mountains beyond were lit by the sun and I was aware of barely suppressed muttering and cursing in the kitchen. The cupboard was bare and the cyclist was a man on a mission. The necessary carb-loading was being delayed by insufficient food in the cupboard. I tried to ignore the unspoken invitation to rescue, but failed.

On entering the kitchen, his lovely self stood there in lycra bib-shorts, turning in an aimless circle his brain audibly seeking something slightly more substantial than an insubstantial bowl of organic natural yogurt. I peered sleepily into the fridge and found half an onion, two tomatoes, half a small tub of passata and a jar of haricot beans. Result!

Whilst he added another layer of lycra, plus socks and silly shoes I set to with a small saucepan and some olive oil. Chopped one small onion and two tomatoes and a big clove of garlic. Fried them off with some added smoked paprika. Added about 75ml passata and a teaspoon of honey, then added 3 tablespoons of the beans. All on a high heat. After all, cycling was being delayed in the process! Toasted two slices from a stale loaf, checked beans for seasoning. Piled beans on the toast.

imageNow. I have watched Huge Fearnleywhittingstallperson do this in the past. And not being a fan of baked beans, I had never been tempted. Until today. Never one to serve small portions, even two rounds of my B-O-T were too much for the king of the mountains and so I got to eat the leftovers after he had cycled off up the hill. Pretty good I’d say. And the beans on toast weren’t bad, either. Back to Hemingway….