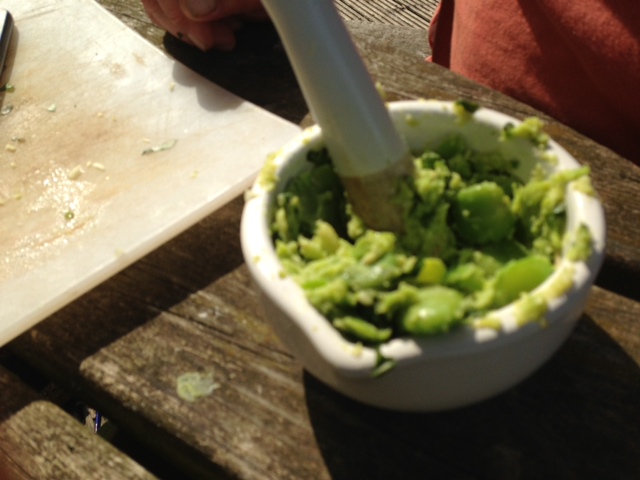 At The Apricot Centre

One of the joys of getting older is the delight of watching things come round again. In a good way, I mean, not the inevitable ‘why are they doing that AGAIN?’. So today, through a chance meeting with a colleague, I rediscovered some childhood memories and watching them come round again, discovered other unknown connections.

The plan today was to call in to see my mum and then pick up the invitation to lunch with Mark and Marina at The Apricot Centre, a 4 acre smallholding specialising in fruit production and sustainable living. I really recommend using the link to read about what Marina is doing there. Today was one of those rare peaceful days, unencumbered by anyone else. I was just on my own. And much as I love everyone, its good to take some time for yourself.

I wandered through the acres of apple, plum, greengage, raspberry, tayberry planted in groups related to dates of cropping to make it easier to harvest, underfoot was short and long grass, bumble bees and birds were in flight. And not a sound of an engine.  In the space of four hours I was reminded of my links with this land as a teenager, the friends I had here, the Land Settlement Association (more about this later), more links with Dutch friends and farmers, memories of working in greenhouses and packing sheds, cycling to friends’ houses on hot summer evenings, old clothes, agricultural shows and the smell of scorched grass and the sound of gymkhana commentaries drifting in the air to my house. And we discovered – Marina, Mark and me – mutual friends first met 35 years ago, associations with Dartington Hall, wholefood shops, sustainable food production and the pleasure of picking food – gathering salads, examining apricots and peaches ripening in the warmth of the polytunnel, and eating it together: Oma, we three and children.

The simplest of pleasures.  Broad bean hummus.  It’s different every time I make it, and this time Mark made it.  Blanch as many broad beans as you have, drain them, then take to a table outside and sit with a friend whilst putting the world to rights (that bit’s not necessary by the way – but making this is a  contemplative and companionable activity).  remove the outer husks (give them to the chickens) then chop some garlic with a little salt and squash half of it with the flat blade of a knife, leaving some crunchy bits behind.  In a good sized bowl or pestle and mortar (not the itsy one you used Mark!) pound the de-husked broad beans with a large handful of basil and mint, a little black pepper, fresh lemon juice and good olive oil to taste.  Pile onto sourdough and eat right now.  Heaven on a plate. Heavenly day.  Thank you Marina and Mark, Ruby, Lily-Mae and Jo.

The Land Settlement Association was started in the mid 30s to re-settle the unemployed (often from the north of England) and offer training in horticulture, housing and 4 acres of land.  Redolent of course  of the attempts by this Government to ‘resettle’ families in 2013 but with a strange twist, this time to areas of high unemployment and deprivation, where rents are lower – in the north of England!  My memories of the Land Settlements (as we called them) are vivid, working in the school holidays grading cauliflowers, packing lettuce, celery and cucumbers, working in the pack house making up cardboard boxes, the houses on large plots of land, lots of greenhouses, a separate community from our village and – in the 60s – a large number of families from The Netherlands. Local people too were glad of employment, part time and full time, but now the LSA has been disbanded and the collaborative elements of what was, essentially, a co-operative method of food production (in the 70s the LSA (10 sites in England) provided over 70% of salad crops to the UK market) have shifted to competition instead of collaboration. And now each working smallholding employs many seasonal migrant workers.   Marina is currently researching the history of the LSA, the means of production, the workforce and  horticultural methods.